It’s early Christmas morning and it’s quiet. In the last days, in a flurry of running and wrapping, shopping and smiling, it’s been hard to schedule in a time just to breathe. But now, I ignore the ticking clock on the mantle and, I sit and reflect.
Yesterday I had an almost two-hour car ride to pick up my son. Listening to various radio programs, I had the realization that the non-Christian world, right here in our country, doesn’t know what to do with “Christmas.” They appear confused or pressured to lean to one side or the other. There’s the long-standing back and forth on whether or not to say the words, “Merry Christmas” or “Happy Holidays” by shop-keepers and bank tellers. But yesterday on a program on CBC, I heard the epitome. On a show where people were telling “holiday” stories, (none of which had one iota to do with Christmas as a celebration), the announcer said, “Happy December 25th Day, everyone.” That one really made me sad. It felt as though the person who said it was as lost as one could possibly be.
On that same station and in malls everywhere, there are potent, life-giving hymns being played. In public places, traditional Christmas hymns such as, “Silent Night”, “Joy to the World” and “O Holy Night” make their way onto song lists. The message is there: Jesus was born and He had a purpose in mind:


“Peace on Earth and mercy mild - God and sinners reconciled!”
“Born to raise the sons of earth, born to give them second birth.”
(Hark the Herald Angels Sing)
What child is this who, laid to rest
On Mary's lap is sleeping? …
Nails, spear shall pierce Him through,
The cross be borne for me, for you.
Hail, hail the Word made flesh,
The Babe, the Son of Mary.
(What Child is This)
The French version of “O Holy Night” brings light and understanding:


Minuit, chrétiens, c’est l’heure solennelle
Où l’Homme-Dieu descendit jusqu’à nous,
Pour effacer la tache originelle,
Et de son Père arrêter le courroux.
Le monde entier tressaille d’espérance,
À cette nuit qui lui donne un Sauveur.
Peuple, à genoux, attends ta délivrance
C’est pour nous tous qu’il naît, qu’il souffre et meurt.
Peuple, debout! Chante ta délivrance.
Noël! Noël! Chantons le Rédempteur!
Midnight, Christians, it is the solemn hour
When God as man descended among us
To expunge the stain of original sin
And to put an end to the wrath of his father.
The entire world thrills with hope
On this night which gives us a savior.
People, on your knees, attend your deliverance.
It is for us all that he was born, that he suffered and died.
People, stand up, sing your deliverance!
Christmas! Christmas! Let us sing the Redeemer!
These songs, and so many others reflect what’s written in the gospels. He is what we’re celebrating. His purpose, His goodness, His love. His message is simple, yet profound: He loves us. He loved us enough to set aside his throne and live among us and to provide an eternity with Him.
Merry Christmas! 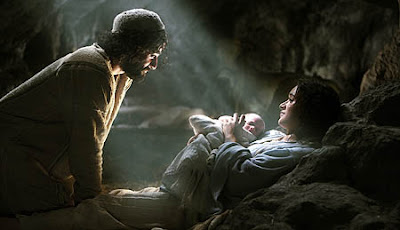